Private Rodent is a young member of the Squirrel High Command whom Conker teamed up with during the war with the Tediz in the It's War chapter of Conker's Bad Fur Day and Conker: Live & Reloaded.

Rodent is somewhat of a cowardly squirrel that wears large glasses that cover up most of his face, and makes his eyes seem huge. Conker met with Rodent in the It's War chapter, where Conker saved him from a Tedi stockade. The two then have a small chat about what was going on in the war. We learn that Conker has known Rodent before, however we don't know Rodent before.(He might be an old friend, or the 2 might have met in the Cock and Plucker Bar..) Conker asks Rodent about his uniform, and Rodent tells him that it's the Experiment #G7224, and he was the first to be fitted with it. Rodent then helped Conker survive the pathway to the inner section of the base, by helping him with his armor to avoid the explosions of the Robo-Spiders. He later advised Conker about the Class Twenty-Two Tank, and helped him bring down The Tower.

After saving the Little Girl from the Submarines, Rodent comes down inside the Class Twenty-Two Tank, where he helps Conker fight The Experiment, though after Conker escapes Tediz Island, Conker believes him to be dead. However, he reappears again at the windmill completely unscratched because his armor shielded him from the explosion. Afterwards, he reappears in the castle after Conker is declared king.

Rodent's shell armor is known as Experiment #G7224, the only one of its kind. It's an indestructible titanium laminate, which means that he's invulnerable to basically anything when he is hidden inside it. The armor was strong enough to help him survive the Countdown detonator going off in the Tediz Island base, as well as survive his subsequent collision with the Windmill after being launched sky-high by the explosion. He is also never seen without the Experiment #G7224. The Experiment #G7224 could be like the Clang Gobling's armor. 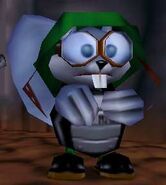 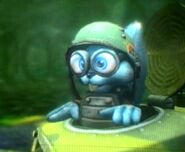 Rodent in the tank. 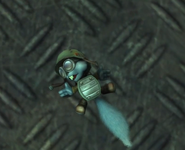 Rodent to the left in Franky, Ron and Reg in the Throne Room.

Rodent and S.H.C. Sergeant.
Add a photo to this gallery
Retrieved from "https://conker.fandom.com/wiki/Rodent_the_Squirrel?oldid=19521"
Community content is available under CC-BY-SA unless otherwise noted.