Marvin the Mouse is a mouse critter that appears in Conker's Bad Fur Day and Conker: Live & Reloaded who has a habit of burping and farting from time to time in which his gases cause Conker to vomit if close to them. When first entering the Barn Boys area, Jack the talking metal block asks Conker to get rid of Marvin to get the larger female block off of him. To do this, Conker has to feed Marvin cheese. Each cheese fed to Marvin gets him bloated with gas. After Conker feeds Marvin three pieces of Cheese from the "Cheese Farm", the mouse gets bloated into exploding, turning him into a bloody mess.

At the end of the game it is shown that he had somehow survived getting blown to bits and has been sewn together, still hungry for Cheese and now standing beside his new king. 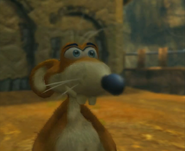 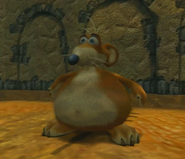 Marvin in the right to the left to the right on the female cog. 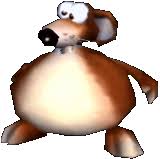 Retrieved from "https://conker.fandom.com/wiki/Marvin_the_Mouse?oldid=19478"
Community content is available under CC-BY-SA unless otherwise noted.