The Long Ranger is a class in the Xbox Live & Co. mode of Conker: Live & Reloaded.

As their name implies, the Long Ranger class is best suited for long-range combat, most notably by their use of the Widowmaker, a high-powered sniper rifle. They are decently fast and have relatively poor defences, as they aren't intended to be around the danger. While their close combat is poor, even with an Upgrade, they perform very well in long range combat, and are good at taking down both vehicles and infantry alike. 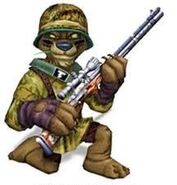