"A real skunk-of-all-trades, this scheming creature is always around when there's mischief in the air."
―Conker's Pocket Tales' instruction booklet

Honker the Skunk is one of the Evil Acorn's minions and Conker's doppelganger and rival in Conker's Pocket Tales. His first mischievous act he commits is shooting the Sheriff at Vulture Ville, therefore framing Conker due to their similar appearance. After Conker escapes from jail, the Sheriff realizes that Conker was innocent, and finds out that it was Honker who had shot him. Conker then confronts Honker at the bank, where he and Honker have a shootout match. After Conker had beaten Honker, Honker left the scene. He was later found at the Mako Islands, where he challenged Conker to the different mini-games that would earn Conker a boat piece. After Conker had found all of the boat pieces, the Evil Acorn pitted Conker against Honker in a boat race challenge. After Conker had won the race, he had retrieved one of the keys for the Aztec Temple. Honker then was never seen again. He does, however, appear in the credits for the game. 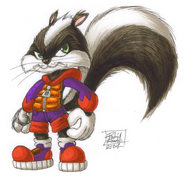 Honker's head sprite.
Add a photo to this gallery

Retrieved from "https://conker.fandom.com/wiki/Honker_the_Skunk?oldid=20394"
Community content is available under CC-BY-SA unless otherwise noted.