"Well, here I am! Conker the King... king of all the land! Who'd a thought that? "But how did I come to this?" I hear you say. "And who are those strange fellows that surround my throne?" I hear you also say! Well. It's a long story. Come closer and I'll tell you. It all started... yesterday. And what a day that was! It's what I call... a bad fur day!"
―Conker

Conker the Squirrel is a red squirrel and the main protagonist of the Conker series. His first appearance was in the Nintendo 64 game Diddy Kong Racing, where he was one of the main playable characters. He later got his own game on the Game Boy Color known as Conker's Pocket Tales, which was a game geared toward a younger audience, originally planned for the Nintendo 64. His first 3D adventure was the Nintendo 64 game Conker's Bad Fur Day, followed by its Xbox remake Conker: Live and Reloaded, Conker's Bad Fur Day and Conker: Live and Reloaded were different from Conker's Pocket Tales because they had gotten an M rating from the ESRB for Violence, Blood and Gore, Sexual Themes, Alcoholic and Drug Reference, and Strong Language. It is unknown if the information on appearance and personality are on other websites and everything else.

Diddy Kong Racing on the Nintendo 64 was Conker's first appearance. His was included in the game in hopes of promoting the then upcoming Twelve Tales: Conker 64. Though Twelve Tales was not to be, Conker's appearance in the game did give him something of a foothold in the public eye. Conker's design in the game was based on his planned look for Twelve Tales, as well as how he would eventually appear in Conker's Pocket Tales. Despite being his first appearance, Diddy Kong Racing did little to establish the character's personality or voice, his handful of lines offering zero insight into as much.

With the ongoing delay of Twelve Tales: Conker 64 which later became Conker's Bad Fur Day, Nintendo allowed Rare to release a Conker game on the Game Boy Color. Rare thought of another Conker game targeted towards the children's market. The game of Conker's Pocket Tales involved Conker's friend Berri who was first introduced in this game planning a surprise party for him, but she is kidnapped by the Evil Acorn. Conker then goes out to save her. This game also had Conker acting differently from how he does in Conker's Bad Fur Day. This was the last Conker game targeted towards children, and was simply just a holdover game for Conker's Bad Fur Day leading this game to not having very positive reviews.

Conker's Bad Fur Day was originally going to be Twelve Tales: Conker 64, an E-rated game like the last two games, but was eventually turned into a mature video game. This led to so much controversy that Nintendo placed a label on the game saying it is not for anyone under 17. This game features an older, greedier, meaner, and alcoholic Conker becoming king of the Panther Kingdom and having to tell the players about his past few days which led to his leadership. It starts with Conker going to a pub one night and getting drunk and walking into the Panther Kingdom accidentally. The Panther King however can't keep his milk on the table because a leg is missing. His assistant Professor von Kriplespac concludes that a red squirrel will make the perfect leg. Conker then has to fight his way through a horde of the Panther King's creatures, and through a war against Kriplespac's Tediz, in order to get home to his girlfriend Berri. On his way Conker winds up meeting a lot of helpers who in particular he thinks are very annoying. Eventually towards the end of the game Don Weaso tells Conker and Berri to break into the Fereral Reserve Bank but it is just a trap set up by the Panther King so he can kill Conker. The Panther King tells Don Weaso to shoot Berri to death, but Kriplespac appears and reveals to the Panther King he betrayed him as he implanted a Xenomorph egg inside the Panther King, which hatches into a Xenomorph (whom Kriplespac names Heinrich) and bursts from the Panther King's stomach, killing him. However, the air lock activates and then Kriplespac, Weaso, and remains of the Panther King and Berri get sucked into space. Conker is then left fighting Heinrich in a Mech Suit, but the game locks and Conker uses the opportunity to talk to the Programmer to help him kill Heinrich. He asks the programmer to take them to the Panther King's Castle, and asks for some weapons to select from. Although it seems like he is going to choose a Rocket Launcher, he chooses a Katana instead, and uses it to slice off Heinrich's head. A bunch of Panther Kingdom residents then appear and crown Conker king, but he isn't happy, because he forgot to ask the programmer to revive Berri. He's left surrounded by everyone who annoyed him to death throughout his quest.

After the credits, he is seen at the bar again, asking for a cup of scotch (single malt, no ice). After feeling drunk again, he walks home.

While the single player mode of Conker: Live & Reloaded is a carbon copy of Conker's Bad Fur Day, with the multiplayer mode is its own little game. The plot of the multiplayer mode can somewhat be considered a sequel (as well as a prequel) to Conker's Bad Fur Day. The multiplayer involves Professor von Kriplespac having survived being sucked into outer space and returning to Earth, creating a new species of Tediz known as the Machine Tediz. These new Tediz wreak havoc on the Panther Kingdom having King Conker send his troops out to go fight against them. It is unknown if this is an official sequel to Conker's Bad Fur Day or not. Conker: Live & Reloaded also has updated graphics and the profanity is toned down.

After many years without a game, Conker appears in the digital add-on, Conker's Big Reunion, for Project Spark. He wakes up in the same way he did in his Bad Fur Day, except this time, he is naked.

Conker's latest outing is set some time before Conker's Bad Fur Day, featuring a younger Conker and Berri in the employ of Squirrel High Command as they work to thwart Professor von Kriplespac's various evil plots.

Conker has also made playable cameos in Minecraft (as part of various skin packs), #IDARB (as a member of the Rare team alongside Banjo, Kazooie, and other Rare characters), and has received a special ship cosmetics set in Sea of Thieves.

Conker has orangish-red/reddish-orange fur with tanish-yellow/yellowish-tan patches of fur on his underbelly and his lower muzzle/snout.

He has big blue eyes and buck teeth. His appearance from Diddy Kong Racing to the actual Conker franchise, while having recognizable differences in clothing and fur, is relatively the same.

In Diddy Kong Racing, his clothing consisted of a blue sleeveless shirt that was blue on the front and yellow on the back, white gloves that seemed to be the exact same color as his fur and blue and white sneakers.

In Conker: Live & Reloaded, he wears a blue long-sleeved zipped-up hoodie with yellowish-green/greenish-yellow trim, a white collar and pale tan drawstrings, green shorts with yellow trim, white socks and blue and yellow lace-up sneakers. He also doesn't wear gloves, and his fur is shown to be slightly scruffy.

This next part doesn't have much to do with physical appearance, but with cartoon facial exaggerations as Conker is no exception to this rule. Examples include Conker's eyes growing in shock of the Haybot and when Conker grabs himself stashes of cash. Another thing is that his whole face can stretch and widen depending on his emotions, like how Rash from Battletoads, another Rare-developed franchise from Microsoft, does when he is scared.

Conker's appearance from Diddy Kong Racing consisted of a shirt that was blue on the front and yellow on the back, and wore white gloves that seemed to blend into his fur. He also wore blue and white sneakers. Conker was larger in the hip area, which gave him a chubby appearance. His chubbiness was lost over the years, his gloves disappeared and his shorts appeared for his new appearance in Conker: Live & Reloaded.

Conker, being a Red Squirrel, is trademarked for his red fur. In Diddy Kong Racing, this was visually true. His mouth area was pure white, as well as the tips of his ears. The tip of his tail was a more beige-ish color. Throughout the games, Conker has maintained the blue hue of his eyes.

In the Rare Xbox Commercial, Conker's appearance was similar to his appearance in Conker: Live & Reloaded, only he didn't have the furry graphics. 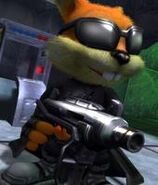 Neo Conker as he appears in Conker: Live & Reloaded.

Conker as a King in 'Conker: Live & Reloaded.

Conker as a king in Conker's Bad Fur Day.

Conker's head on the screen 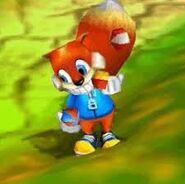 As a young boy, Conker was told by his parents never to drink alcohol, be greedy or swear. In Diddy Kong Racing and Conker's Pocket Tales, Conker appears to be a nice and kind person who obeys rules and always seems to be happy-go-lucky. In Conker's Bad Fur Day however, Conker went through a dramatic change in personality. He had become a slightly greedy, alcoholic squirrel. His relationship with Berri is not as good as it was, and drinking alcoholic beverages is a regular part of Conker's life. As the game implies, Conker disobeyed the rules his parents told him as a kid. These personality traits are also noticed in Conker: Live & Reloaded. Like most of the other squirrels in the Conker franchise, Conker is ignorant, ditzy and carefree. He helps almost every person in the game, not caring what they want or how dangerous the tasks are. And ever since he became alcoholic, he became a bit kooky like most of the other squirrels in the franchise. This was shown when even after he was cured of his dizziness, he still didn't notice he was going the wrong way. And while he was asking the Grotesque "Isn't it a little bit early in the day to start talking about Gothic Architecture?", the time of day has nothing to do with architecture.

Despite his brash personality, he's still somewhat a good guy and hardly ever cusses (minus uttering "bitch", "poo" and "ass" few times as well as "bollocked" and "felatio"). He even uses terms such as "screaming squits" instead of "screaming shits" and "mutha buzzer" instead of "motherfucker". In addition, Conker was also slightly miffed with the more excessive use of foul language within the Panther King's realm, as when encountering Carl and his rudely dismissing him with a "/@*@ off!", Conker asks why everyone is so offensive around the land.

Even though he and Berri's relationship wasn't as close during his boozing days, he still loved her dearly as shown when she died in his arms and went on a great amount of depression once he was crowned king. 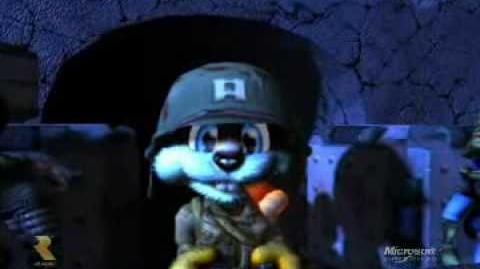 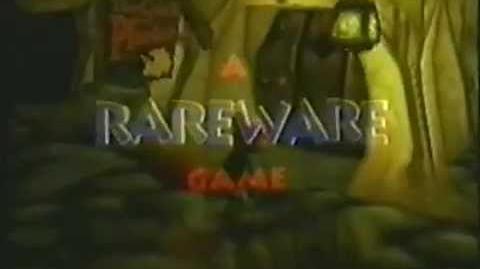 Names other people have called Conker

Here is a list of names that other characters in the Conker series have given Conker.