Conker: Live & Reloaded is a Third person shooter/platform adventure game released for the Xbox in 2005. The single player campaign mode is in most respects a remake of the original Conker's Bad Fur Day for the Nintendo 64, however with updated graphics and higher audio quality. The largest change to the game is a brand new multiplayer mode, known as Xbox Live & Co..

With the December 14, 2006 backwards compatibility update, the game can now be played on the Xbox 360. However, it does suffer from several minor glitches.

On April 17th, 2018 a backwards compatibility update for the Xbox One allowed users to purchase the game digitally or insert the disc and download it to be playable on the Xbox One, at a higher resolution.

The single player portion of Conker: Live & Reloaded is basically a complete remake of Conker's Bad Fur Day, albeit with several small changes, such as improved graphics and enhanced sound effects and voices.

The Xbox Live & Co. multiplayer version of the game is introduced in Live & Reloaded, and follows the use of the same third-person perspective as the single player game's use of weapons. Multiplayer consists of different game missions such as Capture the Flag or the standard Deathmatch modes. The player may participate as a member of the SHC or the Tediz. However, since April 15, 2010, online support for Live and Reloaded has been cancelled (along with other original Xbox titles).

As well as a choice of soldier, the game follows as "classes". Each class has its own special equipment, special abilities, and physical capabilities. Each class is designed for a distinct purpose, and more often than not, the class a player chooses will determine that player's fighting strategy. Each class is designed to have advantages against certain classes while being vulnerable to others. For example, the Thermophile's Sinurator inflicts extreme damage on Sneekers and Long Rangers, who have less health, but is somewhat useless against the high-vitality Demolisher. Each class comes equipped with a primary weapon with unlimited ammunition, (although reloading of the weapon is still required), a limited stock of grenades, and at least one special Ability. The classes also can choose from several Specialist Ordinance items, as well as access Mobile Units terminals to ride vehicles unique to each class, which can be obtained at stations in team bases (however, an option is available to the host of a server to disable one or both features). Abilities common to all classes are the Open Hand, which is the ability to shoulder all weapons for extra running speed, and a Spray Can that can be used to apply the player's Avatar image to walls to mock human opponents. Scattered throughout the arenas are yellow Upgrade orbs, which grant a player more equipment and abilities when obtained. A player loses his upgrade orb upon death, allowing another player to obtain it.

In the director playthrough of Conker's Bad Fur Day, the developers had mentioned that the dumbot names in Live and Reloaded are anagrams. This is a list of the Dumbot names.

The only name that can be nearly confirmed is Babe Chorbi which re-arranged is Robbie Bach. Robbie Bach was the president of the entertainment and devices division at Microsoft. He led the division that is responsible for the Xbox, Xbox 360, Zune, Windows Games, Windows Mobile and the Microsoft TV platform until he retired in 2010.

Terminals are found in every mission, usually near a base. Terminals are computers that dispense useful items or vehicles, and can be accessed by a player during the game. When accessed, a terminal will restock all of the player's grenades and show the player a menu of the available items. When an item is chosen it can be picked up at an adjacent dispenser area. The objects received from the terminals disappear upon the death of the player that obtained them. Terminals may be neutral and available to both sides, or under the control of one side. Terminals can be attacked and disabled, but not destroyed. If damaged or disabled, they can be repaired with an arc weld, issued to the Demolisher and Sky Jockey classes. Neutral or enemy controlled terminals can be hacked with a Sneeker's hacking device. There are two types of terminals: Specialist Ordinance Terminals, and Mobile Units terminals

The game was originally titled as Conker: Live & Uncut featuring a completely uncensored single player experience. Sometime during the development of the game, this was removed and the game was released in a heavily censored form which took out several instances of vulgarity that were in the original game. The reasoning was due to the potential refusal of retailers to sell the game in its fully uncensored form. This idea suggests that the game, at one point, had the potential to have an AO rating by the ESRB, which physical retailers refuse to sell. This drew heavy criticism from fans of the original, especially as it detracted from comedic highlights such as The Great Mighty Poo Song. This song was also censored on the soundtrack, but Rare had the uncensored Xbox version on their website. A code to uncensor the words in the single player game was created, but removed from the final product again due to retailer issues. The accuracy of this statement was questioned by some for several reasons. Like the original, the game was rated M by the ESRB and carried warnings about its content as well as Rare's promotional spoof warnings that advertised the fact that the content of the game was explicitly 'adult'. The audio files on the game disc were "pre-censored" and contained the bleeps, meaning they were not censored by the game engine. This indicated that the ability to play an uncensored version of the game (whether by default or an unlock code) was removed at an early point in the game's development. The only single-player audio file to be uncensored when Count Batula was killed with the word 'shit'. The multiplayer portion of the game is also censored initially, but if one first finishes single player mode, a "Potty Mouth" option is unlocked that removes all censorship from the multiplayer mode.

The following is an in-depth list of various differences between the remake and the original Nintendo 64 version of the game.

While it's no question that remakes tend to update their predecessors' graphical fidelity, Conker: Live & Reloaded takes a few peculiar turns in its effort to improve upon the original in terms of looks.

The way the game conveys itself to the player has been altered a bit for the new console. 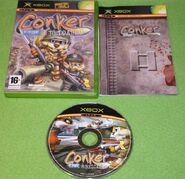 One of the game's demo discs

Another of the game's demos 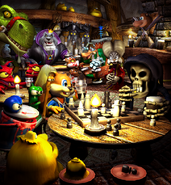 Artwork of Conker and Gregg playing chess in the Cock and Plucker and seen with other characters.
Add a photo to this gallery
Retrieved from "https://conker.fandom.com/wiki/Conker:_Live_%26_Reloaded?oldid=20301"
Community content is available under CC-BY-SA unless otherwise noted.