View source
watch 01:54
Obi-Wan Finale - The Loop
Do you like this video?
Play Sound

Conker's Bad Fur Day is a video game developed by Rare for the Nintendo 64 in 2001.

The story opens with a prologue, similar to the opening scene of A Clockwork Orange, where a miserable Conker says that he is now "king of all the land", and begins to tell the player his story. The story of a "Bad Fur Day".

The morning after a night of binge drinking, Conker awakens to find himself in an unfamiliar land with a terrible hangover. Having no other choice, he begins a long journey with the goal of returning home to his girlfriend, Berri. While he is trying to get home, he also must avoid the minions of the evil Panther King, who wishes to use Conker as a side table leg; his right-hand man and the mad-scientist, Professor von Kriplespac, is tired of being bossed around by the Panther King and plots his vengeance.

Along the way, Conker finds himself in a variety of situations, including having to recover a bee hive from Wayne and the Wankas, confronting an opera-singing pile of feces, being turned into a bat by a vampire, and even getting drafted into a war between the SHC and a Nazi-like race of teddy bears simply known as the Tediz.

While this is occurring, a thug working for Don Weaso, head of the Weasel Mafia, abducts Berri from her home with the intention of using her as an exotic dancer for the Rock Solid club. Don Weaso is later revealed to be working for the Panther King.

Near the end of the game, Berri and Conker are enlisted by Don Weaso to rob a bank. When they get into the vault, they find the Panther King, who has Don Weaso shoot Berri to death and prepares to turn Conker into a side table leg. About this time, Professor von Kriplespac reveals a xenomorph, whom he later calls Heinrich, hiding in the Panther King's chest; Heinrich then bursts out of the Panther King, killing him. Don Weaso uses this opportunity to escape. The vault then turns into a space ship and launches into space, where Heinrich attempts to kill Conker. Conker then opens an air lock, pulling Von Kriplespac into the vacuum of space to his death.

As Conker is about to be killed by Heinrich in the Mech Suit, everything freezes due to the game locking up, and Conker is allowed to ask the Programmers for whatever he wants (who communicate to Conker with a command line). He gets a Katana, and is transported to the Panther King's throne room. He then decapitates Heinrich, and is crowned king by Franky, the Weasel Guards, Ron and Reg (sort of), Rodent, Marvin, and the Lady Cogs, calling back to the prologue. Conker is unhappy with this result, however, as he does not want to be king, and he forgot to ask the Programmer to bring Berri back to life.

Conker returns to the Cock and Plucker, and drowns his sorrows with some scotch. He then stumbles off into the night again, except he goes in the direction opposite to where he went last time.

In the single-player mode, the player takes on the role of Conker and plays the game in a free-roaming environment. Conker can Jump while Crouching to gain high vertical distance, as well as jump more than twice his height in any direction. Conker can also spin his tail around quickly like a helicopter for a few seconds. Rather than give it an official-sounding name, as is the unofficial 'tradition' in the video game business, Conker just calls it the Helicoptery-tail Thingy". This allows him to jump a little higher, navigate in the air to accurately land, and slow his descent if he is far up from the ground. After a few seconds, the tail slows down, and he drops and is not able to do it again until he has landed and jumped again. Besides this, he has few other physical powers. He can Swim underwater for a while until he runs out of breath, jog indefinitely and not get tired, and is strong enough to push heavy objects, which in one of the later levels are The Big Big Guy's testicles.

Conker can eat pieces of "Anti-Gravity Chocolate" to regain lost health; his life bar is represented by six-square chocolate bars. In a parody of similar platforms with unexplained floating pickups throughout levels, they were originally created by Professor von Kriplespac, but he threw them out the castle window when he started a new project. Conker can carry six blocks of chocolate health at maximum capacity. There are two types of chocolate: regenerative chocolate and one-time chocolate. Regenerative chocolate reappears 10 seconds after being eaten. One-time chocolate disappears after eaten, and doesn't reappear until Conker reenters the game world. Anti-gravity chocolate does not provide protection against certain things, such as falls from especially high heights, being hit by spinning blades, or being dismembered in the grinder of Count Batula's Mansion. However, it does protect against being hit with a heavy object from above, such as a large dollop of feces from The Great Mighty Poo.

Conker has a limited number of lives. The ability to do this in the context of the game is explained in a cut scene the first time that Conker dies; according to Gregg the Grim Reaper, squirrels have as many lives as "they think they can get away with," similar to cats, which Gregg is willing to grant Conker another chance if he picks up Squirrel Tails. "Context-sensitive Zones" allow Conker to do things he could not normally do; he usually pulls a far-too-big thing out of his far-too-small pocket, although sometimes he turns into an Anvil and slams into the ground. Zones under beer kegs can give him drunken abilities as well. For instance, he is able to stagger around and urinate on Fire Imps and Rock People. Although most zones only work once, some can be used more than once, or even indefinitely. However, most of the context zones lose their purpose after being utilized, even if they are continuously usable. These context-sensitive areas usually take the form of "B-button pads", and sometimes activate while Conker is in mid-air. However, they are always activated by a press of the B Button. A light bulb appears over Conker's head when he is in a context-sensitive zone. Gameplay in Conker's Bad Fur Day features parodies of various movies and games, such as A Clockwork Orange, The Terminator, The Wizard of Oz, Star Wars, Saving Private Ryan, Reservoir Dogs, and Super Mario 64.

The game has a lot of strong language in it, but only censors a few words, with the subtitles of the speech containing the word being red flashing symbols, like skulls, spirals and lightning. More words are censored in the Xbox remake, most notably "shit".

Health is measured in chocolates, just as in the single player mode.

There have been no known sequels released or even announced for Conker's Bad Fur Day, but a game for the Xbox known as Conker: Live & Reloaded was released in 2005 which featured a remake of Conker's Bad Fur Day with improved graphics and audio quality, as well as a multiplayer mode that can be considered a sequel to Conker's Bad Fur Day. It is very unclear if there will be a sequel though, since Rare has not announced anything on a sequel as of 2013 and Chris Seavor leaving the company. In April 2015, an episodic campaign was released in Project Spark called Conker's Big Reunion that takes place ten years after Bad Fur Day, technically acting as a sequel, but it was cancelled after the first episode.

You can also play Conker's Bad Fur Day on Rare Replay for Xbox One.

The game cartridge for the N64.

A Pikachu tail used for a scene that was cut. Per Nintendo's request, the cutscene had to be removed along with the Pikachu model, leaving only the tail in the game still accessible by hacking. 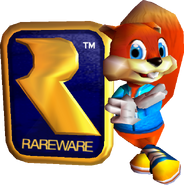 A render of Conker leaning against the Rareware logo before you start the game. 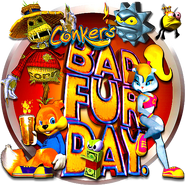 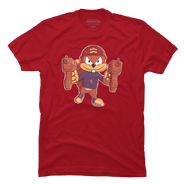 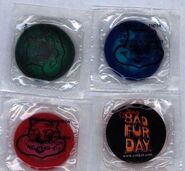 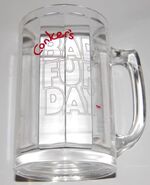 The game was first presented at The Electronic Entertainment Expo in 2000.