The game starts out with Conker and Berri at Conker's birthday party, but just as he is about to blow out the candles on his cake, his friend Berri is kidnapped by the Evil Acorn. The rest of the game is Conker solving puzzles and finding items to assist him on his journey.

The game ends when Conker rescues Berri from the Catacombs, getting his presents back along the way, and the Evil Acorn getting blasted out of the atmosphere by his own bomb, which was planted in said Catacombs. Conker, Berri, and all of the friends that Conker made throughout his quest gather together for a new birthday party for Conker, and Conker and Berri appear to live happily ever after, in direct contrast to Conker's Bad Fur Day.

The game is lighthearted in nature and designed to appeal to younger gamers. It was intended to serve as a precursor to the planned Nintendo 64 title Twelve Tales: Conker 64, however it ultimately ended up being massively re-tooled into Conker's Bad Fur Day, an "adult" title featuring profanity, graphic violence and toilet humor. Conker's Pocket Tales can thus be seen as somewhat of an oddity in the Conker series, as it represents an intended direction for the series which has since been abandoned.

There are a few differences if the game is played on a Game Boy compared to the Game Boy Color. With the exception of the loss or gain of color and slightly different graphics, here are the noticeable changes:

Conker's Pocket Tales has received mixed to average reviews from critics. On Game Rankings the game has a 55% ranking based on four reviews. All Game gave it a score of 3 out of 5 and compared the gameplay to The Legend of Zelda on NES, while GameBoy Station ranked it lower with a score of 4 out of 10. The critic at Game Informer was mostly negative in the published review, commenting that it was a "dreadful game starring an annoying little squirrel." While the design of the game was deemed "noble and interesting", the gameplay and plot was panned. Nintendo Power and IGN were more positive in their reviews of Conker's Pocket Tales, with the latter saying that while the game is fun it is not a masterpiece. The game was described as being targeted solely at kids and the gameplay was deemed to be simple and the music to be on the corny side. Despite this, the critic at IGN said that "Conker's Pocket Tales isn't complex, but it is amusing. Rare is constantly making games that have good gameplay, and this is not exempt despite its cliche tone and overdone premise."

The cover of Conker's Pocket Tales shows Conker aiming with his Slingshot, while there are Evil Acorns, flowers and a Windmill seen around him. This image is derived from artwork from the cancelled Twelve Tales: Conker 64, that was in development at the time of this game's release. Of all things shown on the cover of Conker's Pocket Tales it is only Conker, the Slingshot and the Windmill (though with a different look) that actually makes appearances in the game. Many of these things would later make appearances in Conker's Bad Fur Day but the Evil Acorns were ultimately scrapped.

The soundtrack for Conker's Pocket Tales was composed by Eveline Fischer and Robin Beanland. No official soundtrack has been released but at least two versions of the songs from the game have been compiled. 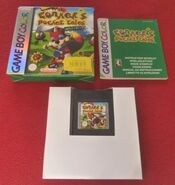 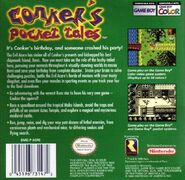 Back cover.
Add a photo to this gallery