Conker's Big Reunion was a third person platform game released as a digital add-on for Microsoft's Project Spark. The Game takes place 10 years after the events of Conker's Bad Fur Day. It expands upon the world and features familiar places.

The game was released on April 23, 2015 worldwide and cost $4.99 on its own. It was also released with the Conker Creation Pack, a pack that lets you create your own levels using Conker, for $9.99. However, Project Spark, and therefore Conker's pack, became completely free on October 5, 2015.

Conker has accrued a pretty hefty bar tab of $300 at his favorite watering hole The Cock & Plucker. Now he needs to pay it off so he can make it to his 10 year reunion (with many characters planned to have returned, including Marvin the Mouse, Franky the Pitchfork, Reg the Paintbrush, Ron the Paintpot, Lady Cogs and Rodent, though only Birdy and the Tediz appeared in the final product). After finding enough money, and protecting the bar from being burned to the ground by the Tediz, Conker learns that the Bar has closed early and that both the owners and patrons were relocating for the reunion, not wanting Conker to be there.

Conker's Big Reunion features similar gameplay mechanics to Bad Fur Day, such as the tailspin, frying pan, platforming elements and other things. No new gameplay mechanics were implemented, although many of the previous ones were somewhat modernized for this expansion (such as the pan having a faster swing speed and cooldown time). 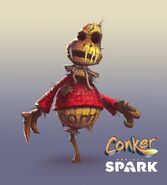 Various Artwork of Disguises
Add a photo to this gallery

Conker drunk in The Brewery

Retrieved from "https://conker.fandom.com/wiki/Conker%27s_Big_Reunion?oldid=19004"
Community content is available under CC-BY-SA unless otherwise noted.