"Berri's confident that Conker will come after, but will the traps and enemies thrown in his path prove too much for her furry friend?"
―Conker's Pocket Tales' instruction booklet

In her debut in Conker's Pocket Tales (and what would have been Twelve Tales: Conker 64), she was a small light brown chipmunk with brunette hair who was about the same size as Conker. She wore a red dress, and had long brown hair. In this game she plans a surprise birthday party for Conker but is kidnapped by the Evil Acorn. It's up to Conker to save her, and get his presents back.

Berri went through a major design change in Conker's Bad Fur Day, having an older, more adult body. In this game, she is taller and gray, wears a pink sports bikini that says 69 on the back, blue eyes, and blonde hair with a ponytail. She also speaks with a strong and stereotypical valley girl/Irish accent.

She is seen working out in her house in the first parts of the game until she is kidnapped by a rock monster. Conker later travels to a prehistoric land to find her located in a prison. He frees her from her prison, but she doesn't recognize him in his disguise. Later, Conker runs into Berri and Don Weaso at the Feral Reserve Bank. Don Weaso gives them orders to rob the bank, but it is just a trap set up by the Panther King in order to get close enough to Conker use him as a leg for his broken table. However, she is shot to death by Don Weaso and her remains are sucked into space by the airlock along with the remains of the Panther King, possibly Don Weaso, and the still alive Professor von Kripplespac. Towards the end of the final battle, the game locks and Conker uses the opportunity to defeat Heinrich but forgets in the commotion to revive Berri and the final battle ends.

Berri was a no nonsense and promiscuous kind of girl, she was fit, level-head, smart, sassy, but also snobby. She was shown to be something of a health freak, often working out daily when Conker wasn't around. She also displayed dim-wittedness (though other smart characters in the game have displayed a lack of intelligence at times). She was also very fond of the color pink. Although she was frustrated with Conker's late night antics and alcoholism, she did genuinely and deeply care about him and loved him with all of her heart, often referring to him as "Conker Honey" and still referred him to as her boyfriend. While dying, she was held in Conker's arms implying truly that she loved him despite all that they had been through.

Despite this, not much chemistry was shown between the two in the game.

She's waiting for your conkers... 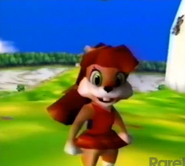 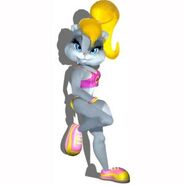 Add a photo to this gallery
Retrieved from "https://conker.fandom.com/wiki/Berri?oldid=20339"
Community content is available under CC-BY-SA unless otherwise noted.